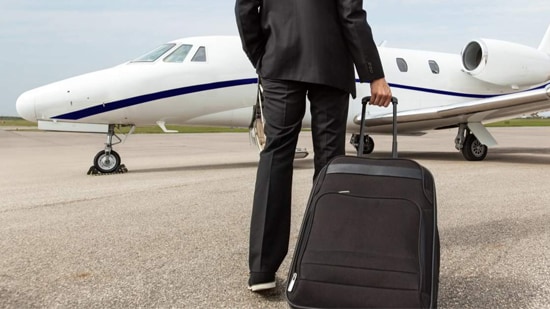 Owning a private jet used to be a privilege reserved for the rich and famous. Not any more. We take a look at the top five most affordable private jets according to the different sizes of aircraft.

If you’ve ever thought that private plane charter was your only option, then you’ll be interested to learn that there are actually some affordable private planes out there to buy. Owning a private jet might sound like the domain of the extremely wealthy, but the cheapest private plane costs might surprise you, and you’ll soon realise that private plane rental isn’t your only available choice. Whether you’re shopping – or window shopping – for a very light, light, mid-weight, or heavy jet, the most affordable private options can be a fraction of the price of the most expensive. We’ve listed the cheapest private jet in each category to give you an idea of what’s available.

The cheapest private jet on the market is the small but mighty Cirrus Vision Jet at a cool £1.4 million. It’s the world’s first single-engine private jet, and is powered by a Williams International FJ33-5A turbofan engine, which produces 1,800lbs of thrust. The aircraft took 10 years to design and build, and features a unique V-tail instead of a traditional rudder. The Vision Jet can cruise at 345mph at a maximum altitude of 28,000ft, with a range of 1,150 miles. Although designed to be flown by the owner, a pilot can be hired instead.

Passengers can enjoy a spacious cabin at 1.2m tall and 1.5m wide, with large windows and seating for up to five adults and two children. Luxurious amenities include an in-flight entertainment system, mood lighting and USB charging points. There’s a panoramic windshield in the cockpit, as well as a cutting-edge Garmin Perspective Touch avionics suite and sidestick technology. The Vision Jet even boasts a flight envelope and parachute system for emergencies.

If the Vision Jet sounds a little tight on space, you could always buy a brand new Cessna Citation CJ3+ for £6 million. Launched in 2014, it’s a new and improved version of the CJ3 – named ‘Best of the Best’ in the light jet category by Robb Report in 2011 – and has a more comfortable cabin and an upgraded Garmin 3000 avionics system. The aircraft is certified for single-pilot operation and has an impressive wingspan of more than 16m, which is designed for extra lift and less drag.

The cabin can accommodate up to six passengers and is 1.2m tall, 1.2m wide, and 4.8m long. It features 14 large windows, swing-out seats, LED lighting, Wi-Fi and a standard lavatory, with six design themes to choose from. In addition, the jet has a maximum range of 2,040 nautical miles, a luggage capacity of 450kg, and is cheaper to run than its closest competitors, such as the Phenom 300.

The world’s bestselling business jet can be yours for £9.3 million. Launched in 1998, the Cessna Citation XLS+ is a very versatile aircraft. It delivers high performance on both short- and long-haul flights. The Citation XLS+ has a maximum cruise speed of 507mph and a transcontinental long range of 2,100 nautical miles. The jet can also take off from shorter runways and has a state-of-the-art Rockwell Collins Pro Line 21 avionics system.

The cabin comes in six colour schemes and is the largest in its class at 1.7m tall, 1.7m wide, and 5.6m long. Passengers can relax with fully reclining leather seats, foldaway tables, an entertainment system and Wi-Fi. You can even configure the cabin to include a side-facing couch. There’s seating for up to eight passengers and a galley for food preparation, as well as space for more than 360kg of baggage.

The Falcon 50 by Dassault Aviation was the first private jet with intercontinental range, and it was a massively popular private aircraft. 17 years after the Falcon 50 was released, Dassault Aviation recreated the aircraft, keeping its most popular features and upgrading the rest with cutting-edge technology. The result? The Falcon 50EX: a private plane that looks and feels like the Falcon 50, but with technology that makes it easily supersede its predecessor. It cruises faster at higher altitudes, burns less fuel, flies further, and can outperform the Falcon 50 across the board.

The cabin itself is probably the part that has been altered the least. It still has a height of 1.7m, and width of 1.8m, and can take nine passengers. This sturdy aircraft is 18.52m long, 6.98m wide, and has a wingspan of 18.86m. The cabin is split into two zones and has its own temperature control, fold-out work desks, comfortable seats, and plenty of cupboard space for hand luggage.

While the cost of large jets is usually enough to bring you out in a cold sweat, the cheapest private jet in this category may surprise you. The luxurious Embraer Legacy 650E comes in at £18.8 million, a relative bargain when compared to the similarly sized, £44.75 million Gulfstream G550. The ‘E’ stands for ‘Evolution’ – and the model certainly offers that, with two Rolls-Royce AE 3007A2 engines and a Honeywell Primus Elite avionics system. As an aviation industry first, the plane also comes with a 10-year or 10,000-hour warranty.

The Legacy 650E has seating for 12-13 passengers in three separate cabin zones, allowing some to work while others sleep in leather seats. There is broadband, Apple TV and worldwide phone service, as well as multiple configurations that can include a conference table for business meetings. With a cabin height of 1.8m, a width of 1.85m, and a length of just over 14m, there’s no shortage of space in this private jet. The 3,900-nautical-mile range allows for longer flight hours, so travellers can fly non-stop from Munich to New York, for example.

Best of the rest

Looking for more low-cost private jets? Here are some other options:

Beyond the price tag

No matter how affordable these private jets may sound, it’s important to remember prices don’t include additional costs that affect private plane owners, such as inspections, insurance, hangar space, pilot expenses and interior customisations. You should also take into consideration fuel costs, which vary depending on your private jet’s flight time and aircraft type.

Charter your own private jet with Air Charter Service (ACS)

Of course, you can avoid most of these costs by opting for a private jet charter or private jet rental instead. Contact us at your local ACS office for a personalised quote on private jet charter costs for the aircraft of your choice. We also offer empty-leg flights at significant savings compared to regular private jet flights when a plane is flying empty back to base following a one-way booking. Keep an eye out for deals on our regularly updated empty leg flights page.

Whether you’re interested in becoming a pilot, avionics mechanic, air traffic controller or flight attendant, there’s a variety of potential job paths in the aviation industry. We take a look at some of the highest paying aviation jobs.

The 5 most expensive private jets in the world

The landscape of the rich and famous is changing and you have more chance these days of flying in a luxury private jet than ever before. We take a peek at what’s inside the world’s five most expensive private jets and the people who own them.

How much does it cost to charter a private jet in the UK?

Have you ever wondered what it costs to charter a private jet in the UK? Our handy guide will give you a better idea of prices for a range of aircraft, from small to midsize and long-range jets.