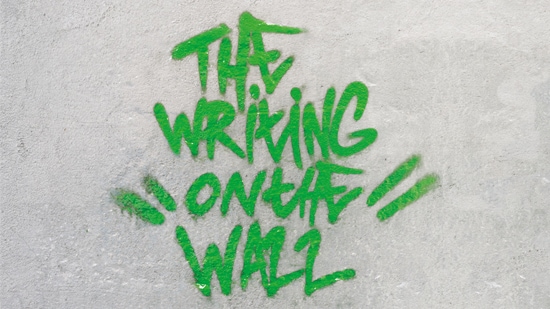 After 50 years of tagging names, street art is weaving its way into the world of fine art.

The writing on the wall

After 50 years of tagging names, street art is weaving its way into the world of fine art.

Residents of the British commuter town of Reading recently awoke to find a depiction of the playwright Oscar Wilde spray-painted on the exterior walls of its now-empty Victorian prison.

Wilde, a former inmate who served time for the then-criminal offence of homosexuality, could be seen using bedsheets to descend the wall with a typewriter tied to one end. Shortly afterwards, the street artist Banksy took to social media to confirm the piece was his as part of an ongoing campaign to turn the disused jail into a cultural centre for the arts.

Cue bedlam, with locals flocking to the site and media outlets lauding the artist’s work. Days later, a rival graffiti group using the tag ‘Team Robbo’ painted over part of Banksy’s piece. The ‘culprits’ were promptly described as vandals and the borough council was criticised for failing to protect the town’s precious new asset.

The whole incident served to once again highlight the blurred lines between what is considered art and what constitutes defacing public property. After more than half a century of urban graffiti, the two views have become intrinsically linked to the movement’s rising fame, recognition and wealth.

“It’s the art equivalent of one being the freedom fighter and the other the terrorist,” says Michel Boersma, producer of the Art of Banksy, the world’s largest touring collection of his works. “Are Team Robbo’s actions vandalism? Because Banksy vandalised the building first. It’s a continuous loop.”

Back in the day

Forget hieroglyphics. Modern street art’s origins date back to late 1960s and early ’70s Philadelphia and New York, where spray painters like ‘Taki 183’ would tag their nickname and street number to mark their territory with a kind of slightly more sophisticated ‘I woz ’ere’ stamp.

As time progressed, graffiti would become more daring in its approach, execution and visible location. It would also become one of the four founding elements of hip-hop culture, alongside DJing, rapping and breakdancing. By the 1980s, the scene would explode internationally thanks to seminal works such as the movie Wild Style, the documentary Style Wars and the book Subway Art by photographers Martha Cooper and Henry Chalfan.

They also made the artists themselves sellable. Despite this, traditional galleries have been accused of a narrow-minded approach and of showing poor recognition of the contributions of graffiti to the art world, although perhaps the artists don’t always do themselves any favours.

“The art world is the biggest joke going. it’s a rest home for the overprivileged, the pretentious, and the weak,” Banksy is quoted as saying. “People say that what I do – graffiti art – is ugly, selfish and a pathetic attempt to achieve some kind of fame. I’m frustrated by many things but trying to get accepted by the art world and become famous isn’t one of them.”

“I think it’s a generational thing,” says Boersma. “Because it started on the street, there is this barrier. I see it in other art forms too where I deal with the ‘old guard’ and, when you try to get a younger audience in, it’s suddenly scary or it’s not art. But this is not a fad. In the next five to 10 years, we will see museums starting to buy collections.”

More than 50 years on from ‘Taki 183’ and company, there is still some way to go before the worlds of street art and fine art become one because they’re still so at odds with each other.

“People expect to come and see parts of houses and doors and walls and that kind of stuff; we don’t do that,” says Boersma. “That is art that should be on the street, that is made on the street and is made to be seen just by walking past it. It’s not made to be seen in a museum or gallery.”

Of course, the street art world doesn’t end with Banksy – something Boersma is fully aware of. “A lot of the origins, a lot of the names are being forgotten and they shouldn’t be forgotten. Go look further, go dive into that deeper world, because there were people before Banksy who inspired Banksy, and we are trying to find a way of doing that world justice.

“But it’s very difficult, because a lot of it was proper street art. We are lucky Banksy sells prints to collectors, otherwise it’s on the side of a train and it’s gone. People are only getting the main meal and they don’t understand there’s a course before it and dessert after it, and that main meal is even nicer if you understand the world around it.”