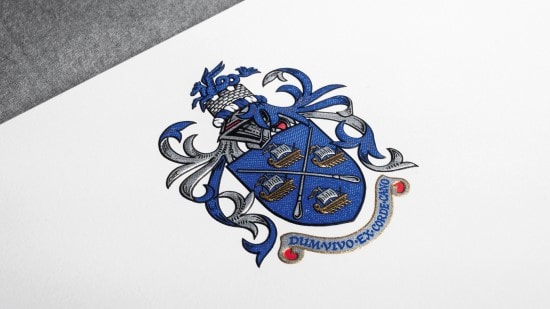 James Laver, curator for the Victoria and Albert Museum between 1938 and 1959, famously founded the ‘law of the fashion cycle’ which states that fashion trends come back around every 50 years – but he was wrong. Having a bespoke coat of arms is the ultimate new accessory, and one that has taken around 900 years to come back into vogue.

It’s not a resurgence of jousting that has precipitated this change and, in reality, coats of arms have never completely gone away for official positions. However, specially commissioned unofficial coats of arms are becoming popular motifs among modern celebrities and business moguls. Today, they can be found adorning stationery, emblazoned on the sides of yachts, embroidered into car seats or even embossed onto leather luggage.

First appearing in the 12th century, crests and coats of arms were essentially the first brand logos. When knights would meet on the battlefield or at jousting tournaments, the designs on their shields and armour would help identify them. Heralds, whose main role was the proclamation and organisation of tournaments, would recognise knights by their coat of arms. Later, they also became responsible for recording them and controlling their use.

Coats of arms evolved from simple identifiers to family emblems, with designs reflecting the status and achievements of each family. However, and contrary to popular belief, there is no such thing as a single coat of arms for a family name. Generations would modify the designs on the shield (known as the ‘charge’) to reflect their personal values, while maintaining the upper portion (the ‘crest’) as the overarching symbol of that specific family.

The use of coats of arms spread during the late Middle Ages to establishments such as cities and towns, and they have continued to be granted to companies, charities, civic bodies and even entire nations ever since.

Coats of arms are still an effective means of communicating heritage and prestige for individuals and organisations, and this is why their use was once heavily regulated. Even today, official coats of arms in the United Kingdom and many Commonwealth countries must still be formally granted by the College of Arms.

Founded in 1484, the College of Arms is the world’s most famous official heraldic authority. Since the 15th century, new official coats of arms have been granted to individuals and corporate bodies by the senior heralds in royal service – the Kings of Arms. Today, the College grants approximately 140 coats of arms each year and maintains a register of them.

The first step in applying for a grant of arms is to submit a petition, called a ‘memorial’, to a senior official called the Earl Marshal. Although there are no fixed criteria, factors such as honours from the Crown and professional qualifications are considered. If the Earl Marshal approves, the design process begins. Once the design has been finalised, it is checked against the register of arms to ensure it is distinct and then submitted to the Kings of Arms for their approval. The applicant’s preferences are taken into account, but the Kings of Arms make the final decision about accepting the design.

However, this is not the only way to obtain a bespoke coat of arms…

In recent years, many celebrities and business leaders have commissioned their own unofficial coats of arms, and British-based designers are benefiting from the country’s heraldic history. According to Downey, a specialist print and design house located in London’s Mayfair, the demand for British-made coats of arms has risen by 50-100 per cent during the last few years. But why now?

“Firstly, there has been a recent influx of coat of arms and heraldic insignia shown in the media. Television shows such as Game of Thrones and the Harry Potter films highlight this imagery,” explains Leo Turner, who is part of the third generation to own and run Downey.

“Secondly, with an ever-increasing demand for personalisation and custom design in all products, this is a great way to bring your own personality and history together in a visual way. We’re seeing increased demand from all regions, predominantly the UK and Europe along with the USA, the Middle East and Asia.”

Downey prints specialist stationery showing coats of arms or Royal Warrants for official arms holders and has done for more than 100 years. It also offers a design service for those who wish to create their own. This experience is important; the design of coats of arms is heavy with symbolism and meaning.

“Nothing is included by accident,” as Downey’s website puts it. “The coat of arms tells a historic story of the individual, the family origins, their passions and personal interests. You will be able to learn that someone is a keen horse rider as you would expect to see it featured on their arms. For a jeweller, you might expect to see a diamond or another precious stone within their design.

“The language of heraldry is rich in allusion and metaphor, drawing on the perceived qualities of animals, mythical creatures, trees and flowers, and even everyday objects to tell a visual story about the bearer.”

You can see this symbolism at work in the coats of arms of some famous figures. Jeff Bezos has one for his spaceflight project Blue Origin that features two tortoises, an allusion to the fable of the tortoise and the hare, and a representation of the company’s motto: “Step by step, ferociously.” Official arms designs are more subtle – Sir Elton John’s features piano keys along the top, while the lines on Sir Paul McCartney’s represent guitar strings.

“Many traditional icons can be taken as unusual,” Leo continues. “However, we have produced a design for somebody who is in the technology business and one of the features on his arms was a microchip.”

Whether demonstrating recent prestige in your field or a relic from the past, a coat of arms is a perfect symbol of one’s values. And it’s more than simply a fashion accessory or logo – it’s a legacy for the future.